Last month, the International Telecommunications Society, a forum for leading practitioners, academics and policy-makers to meet and share ideas, hosted a webinar involving participants from 27 countries (and according to ITS Chair Stephen Schmidt, “from every continent other than Antarctica”) on technology-based Covid-19 tracking and tracing apps. True to the Society’s ethos, the seminar included presenters from all four corners of the globe, presenting a multi-disciplinary array of perspectives – economic, legal, technological – across all of its academic, industry, policy and regulatory constituencies. A video of the 2-hour webinar is available here, with presenters’ slides here.

To recap, contact tracing during a pandemic is a public health-based initiative whereby the close contacts of an individual found to have contracted the illness (in this case, Covid-19) – those individuals who have been in sufficiently close contact with the infected person for transmission of the illness to be likely – are identified, listed, notified and followed up to ensure that they take necessary steps to both identify if they have, indeed, been infected (usually by testing) and to prevent onward transmission of the disease in the wider community (e.g. isolation).

While handset-based apps such as New Zealand’s NZ COVID Tracer, Australia’s COVIDSafe, Japan’s COCOA,  Austria’s STOPP CORONA, and the jointly-developed Apple/Google initiative have attracted much attention for their role in supplementing human contact tracing processes, the webinar identified that these apps are but a subset of the manifestly different ways that technologies can be harnessed to provide information about the disease and to facilitate its management.

For example, ‘floating” mobile phone data, collected and anonymised from mobile handsets as they (and their owners) move around can be mapped using machine learning with data about the time and location of where Covid-positive tests were taken to detect patterns in the way in which the virus is spreading in specific geographic locations. Such analysis, already undertaken in the United States and Germany, can prove useful in both mapping how the virus has spread and in predicting where future spread may occur. The latter application enables preventative measures (e.g. lockdowns, self-isolation of vulnerable individuals) to be taken in areas where it is expected the virus will spread, rather than relying on ex post contacting of individuals who have already been exposed, as occurs in traditional contact tracing. Such ‘fine tuning’ offers great promise for policy-makers looking to avoid costly blanket lockdowns over wide areas, when more selective ones could be equally as effective and less economically damaging.

However, never far from the forefront in the international discussion was the nexus between the use of apps and individual privacy concerns.  Whilst it has been suggested that more extensive use of phone-based apps in Asia has been possible because of less importance placed on users’ privacy, and the ability to compel users to share information, it is not impossible to create apps where both privacy and app effectiveness can be combined. For example, the Australian and New Zealand apps have been developed with a strong privacy focus. Data is stored on phones, deleted after a defined time and shared with public health authorities only with the permission of the user when the user tests Covid-positive. Public health authorities then take the lead in subsequent contact tracing activity, ensuring that close contacts are followed up.

This differs from the approach in the Apple/Google app and in some European apps, where a great deal of reliance is placed on the individual phone owner, when notified of a likely contact, acting in an anticipated, and predictable manner (i.e. presenting for testing and self-isolating). The added assurances of privacy in these cases – around not sharing any information with health authorities for fear that the information may be mis-used – ensures that strict privacy requirements such as the EU’s GDPR are met, but potentially reduces the effectiveness of the apps in the first place.  The apparent lack of integration of the apps with public health initiatives was identified by some webinar participants as a notable weakness in the European approach to date.

A final take-out from the webinar was the fact that none of the apps will be able to deliver to their potential if they are not used (or if barriers exist to their adoption and use as a consequence of undue emphasis on privacy deterring their development and deployment). At the very least, it appears that more detailed and robust conversations about the willingness of individuals to forego some limited rights to privacy in exchange for the reduction in health risk for populations are indicated. Because even in those jurisdictions where privacy concerns have, to a large extent been addressed, voluntary app uptake and usage is underwhelming. For example, although NZ COVID Tracer has been downloaded by nearly 50 percent of the population (Figure 1), especially during a recent resurgence of the virus in August which led to re-imposition of lockdowns, the number of scans of QR codes per day peaked at less than 1.2 per app per day, and fell away rapidly as the outbreak came under control (Figure 2).

As Mr Schmidt summarised at the webinar, there are no “silver bullets” in the apps, but much that can be learned from sharing experiences. 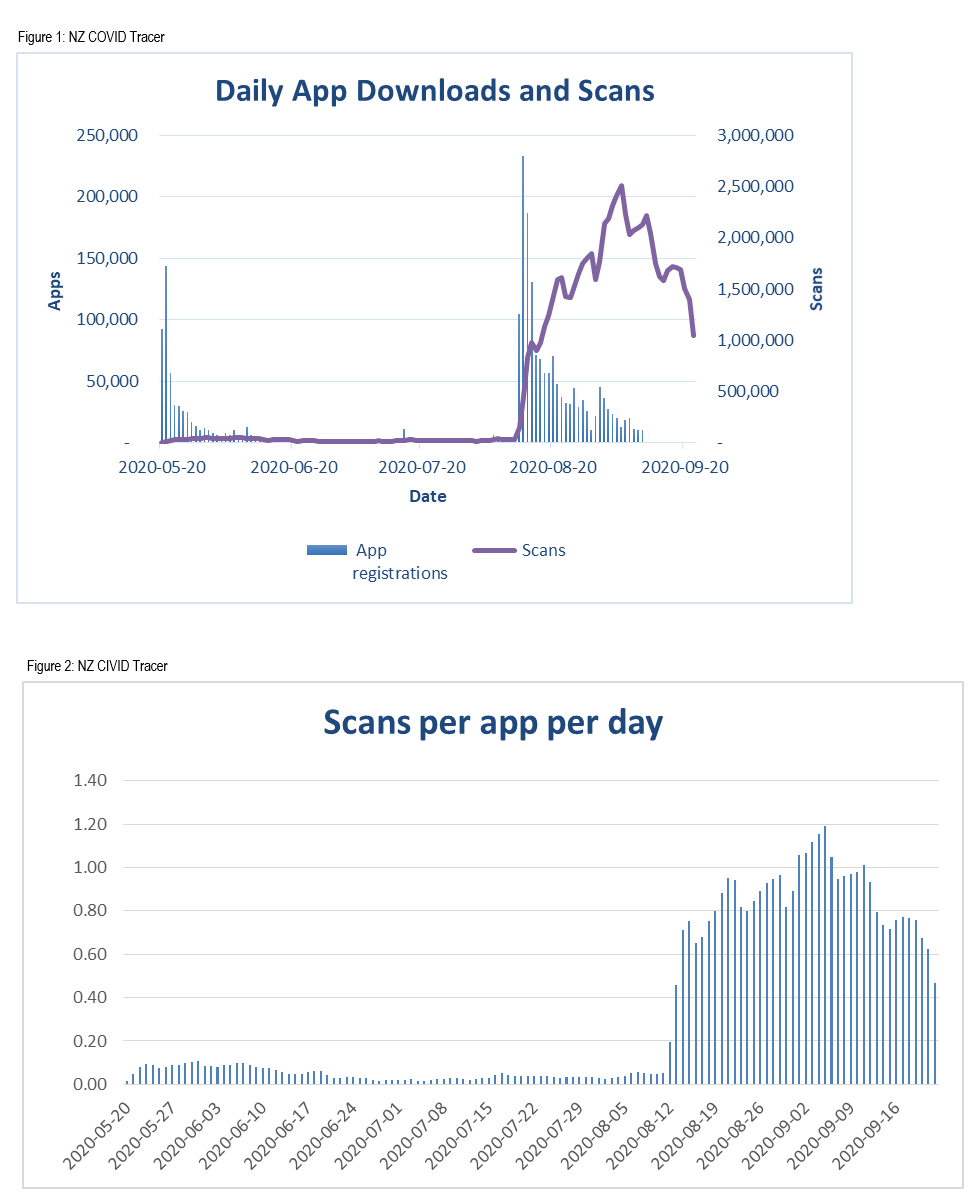 Note: A previous version of this blog was published by the American Enterprise Institute here.

What is the future of the Internet?

ITS Workshop: Spectrum Policy and Auctions: Best Practice from Around the World

Tomorrow is now – A workshop on 5G technology, operations and regulation

Become an ITS Member!